time ：2020-01-16 author ： from： scanning ：3831 classify ：Company news
In a complete track fixing system, each component is used to fix the running track on the track chair or base plate, or directly on the track sleeper, bearing or other track support. The fixing of the guide rail can fix the guide rail on the sleeper (transfer force), provide a proper inclination of the guide rail foot (1:20, 1:40) on the horizontal plane, and prevent the longitudinal movement of the rail, damp vibration and noise from the rail.

In a complete track fixing system, each component is used to fix the running track on the track chair or base plate, or directly on the track sleeper, bearing or other track support. The fixing of the guide rail can fix the guide rail on the sleeper (transfer force), provide a proper inclination of the guide rail foot (1:20, 1:40) on the horizontal plane, and prevent the longitudinal movement of the rail, damp vibration and noise from the rail. 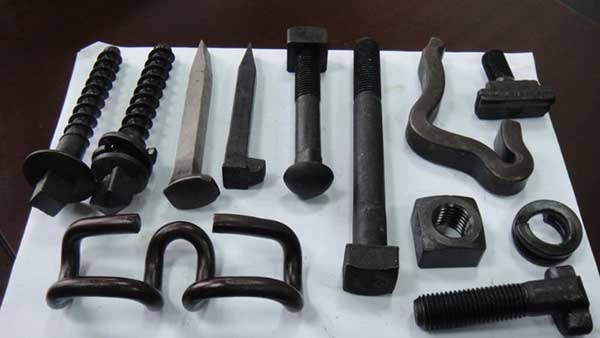 Where practicable, rail fasteners shall be self tensioned or allowed to be tightened to a predetermined load.

If the existing track fixing device can not effectively reduce the longitudinal movement of the track, the track anchor can be installed as a method to meet this requirement. 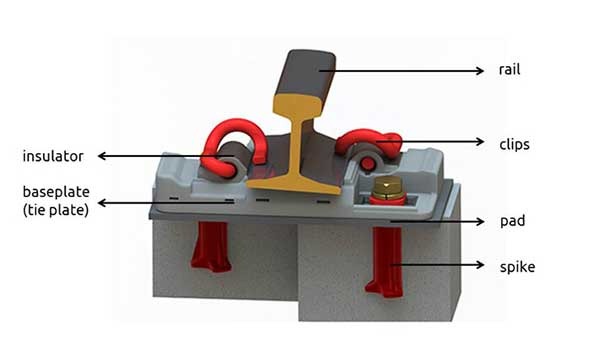 Leomon Energy-Saving Technology has passed the SGS SA audit, passed the ISO 9001:2008 certification, and obtained the approval of China Railway product testing and Certification Center (CRCC). Our products have been recognized by world-class railway companies, including UPRR, BNSF, SBB, SRT, PNR and MTR. We have a professional R & D team, and all members are committed to the development and improvement of rail fasteners in various fields.

The rail clamp is used to fix the rail to the base plate below.

Railway nails (also known as cutting nails or ice claws) are large nails with eccentric heads, which are used to fix rails and baseplates on rails (sleepers).

The slide screw is a large (~ 6 inch or 152 mm long, slightly less than 1 inch or 25 mm) metal screw, which is used to fix the connecting plate or fixed slide.

A plate is also known as a base plate or base plate. The track fixing plate is used in the track structure to support the track. The sleeper plate is usually used to bear the load of the rail and distribute the load to the sleeper to provide proven economy.

The track insulator is used to adjust the track specification and insulate the track from ties and clamps.

The skid pad was originally called the base plate when connecting the skid to concrete rather than wood, ties or sleepers. The purpose of the rail pad is to reduce the fatigue cracking of the concrete ties, which is believed to be driven by the impact and vibration of passing trains.

Air raid pad can prevent the wear of sleepers and the crushing of sleepers under sleepers. Rubber track pads are usually designed to have the specified load deflection characteristics. The initial stiffness of slide pads is designed to be very low, so their deformation under the spring toe load is quite large. This ensures that the track pad remains in close contact with the track despite any vertical movement of the track. When the wheel is on the track pad, the latter must have high rigidity to prevent large movement that may cause the metal spring to loosen. This load deflection characteristic can be obtained by introducing a groove in the rubber guide pad. Rubber pads or grooved rubber guide pads are made of rubber or plastic to reduce the impact of train vibration during driving. The guide rail components used together (including guide rail bracket, guide rail fastener, pad and guide rail foot insulator) shall be compatible. In general, railway fasteners meeting different railway standards will bring more convenience to customers, because they can provide more choices for correct railway fastener components according to the environment, transportation requirements and other physical problems.

How to choose the right rail fastener?

The following factors must be considered in the selection of guide rail fasteners:

Load generated by braking and acceleration of train

is a leading manufacturer and supplier of rail fastener in China. We are committed to providing the best quality fasteners for the railway industry, and to providing a safer and more convenient mode of transportation.

We have a professional R & D team, they are committed to the development and improvement of railway fasteners in various fields.

In Eastern Europe and Central Asia, we provide w-rail fastening system, KP fastening system, track connecting rod and track bolt, track pin and connecting plate to the region. We manufacture and supply according to gost, UIC and DIN standards and other specifications required by customers.

Mb：86-15215554137
Email：kelly@kirail.com
info@kirail.com
Address: No.1699, huolishan Avenue, Ma'anshan City, Anhui Province, China
Contact information
Leomon Energy-Saving Technology
We adhere to the business tenet of "quality first, integrity-based, customer service", and take the business philosophy of "market-oriented, safety as the cornerstone, quality as the guarantee, customer-centered, development as the fundamental" to provide customers with high-quality and honest services. We firmly believe that "service creates value." Willing to work with you to create the future!